We begin this blog entry on a plane. After a midnight departure from Toronto we spent the following six hours attempting to catch a few hours of sleep before arriving in London just before noon the following day. Everything went pretty much as planned and sure enough we eventually found ourselves deep within terminal 2 of Heathrow airport. After what felt like two days of walking we were met with UK border control and what hands down must be the easiest border crossing I have ever done. It was seriously even easier than returning to my own country. All I had to do was scan my passport and then a gate opened and that was it...welcome to the United Kingdom. Now I assume the United Kingdom is so naiive just to let anyone arriving from certain trusted countries in so it make me realize how much information a government must be able to obtain about an individual simply by scanning a passport. Anyway, I digress, I'm in the United Kingdom now and that's all that really matters.

Once leaving the airport and picking up our rental car (anyone heard of Skoda before?) we sped off to the M25 en route to Bromsgrove. Sorry, I just need to make one small correction. We did not speed off anywhere. The traffic has been insane since arriving in England so there has been a lot of staring at the car in front of us as we slowly make our way to our next destination.

We did make it to Bromsgrove eventually and visited my Dad's Aunt Florence. It had been 20 years since I had seen her last! We all had a cup of tea together as her home and then said farewell.

Next up was a visit to the nearby Marks & Spencer which also happens to be the largest in the country. Spread over two floors this location had plenty of clothes, housewares and their famous food.

If you have been following along closely this this was still our first day in England after an overnight flight so jet lag was really starting to kick in. Knowing the clock was ticking we raced back to the hotel to check in and then went to the attached restaurant to a quick bite before calling it a night at 10:00pm. 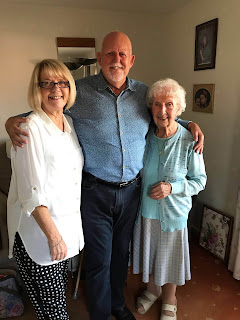 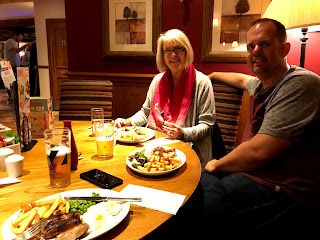